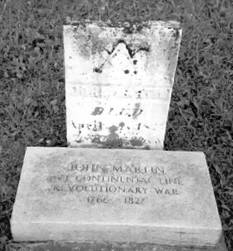 Thanks for being a member of the John Martin Chapter of the Indiana Sons of the American Revolution. It has been my pleasure being your chapter president since January 1, 2015. I have also been the chapter's Genealogist / Registrar, and have assisted many of you in joining the SAR
During the quarterly meeting last October your chapter officers were elected for another two year term (1 January 2019 to 31 December 2020). Your chapter officers are: President - Clifford Blanchard,  Vice-President - Vacant, Secretary - David Clendenen, Treasurer - George Brattain, Chaplain - Donald Smock, Historian - Steven Heller, and Genealogist/Registrar - Clifford Blanchard.  Vice-President Jim Hicks has declined being re-elected due to health issues. Wilbur Decker became a chapter member on 1 January 2019, and has accepted the Vice-President office upon being nominated during the March 2019 meeting.
The John Martin Chapter will have four quarterly meetings in 2019. Three will be held on Saturday in the basement of the Vigo County Public Library on 16 March, 11 May and 12 October. The Bi-Chapter meeting will be in August (date to be determined by the William Harrison Chapter). Please check the Indiana SAR Official website indianasar.org for updates. Click on "About Us", and go to Chapter. Find the John Martin Chapter, and click on "Facts and Meeting Dates". You can also find previous meeting photos under "Chapter Events".

The John Martin Chapter will host the Spring House of Delegates meeting on 13 April 2019, Saturday at MCL in Terre Haute, Indiana. Representatives from several Indiana SAR Chapters will be attending, and this will be a great opportunity to meet other members. Students representing different chapters will be giving their speech in hopes of representing Indiana at National for the Joseph S. Rumbaugh Historical Oration Contest. Chapters will also display their Americanism Elementary School Posters for state consideration. Election of State Officers will be accomplished. The John Martin Chapter needs to show our support, so your attendance would be greatly appreciated.
The George Rogers Clark wreath laying ceremony is normally held on the last Saturday in May. Representatives from National, Indiana SAR, DAR, CAR chapters and the Ladies Auxilaries will be present. Members from the surrounding states are also  in attendance. David Clendenen and I have placed a wreath at the last four ceremonies on behalf of the John Martin Chapter.
The John Martin Chapter held its first wreath laying ceremony last year by placing a SAR Patriot marker near our Revolutionary Patriot John Martin's headstone. The ceremony was attended by representatives from several SAR and DAR chapters along with relatives of John Martin. We have two SAR Patriot markers left, which need to be placed at other patriots headstones. I'd like to place one at John Yocun's headstone in Clay County, and I've been asked to place the other at a patriot in Putnam County. Your attendance and assistance in organizing these ceremonies would be helpful.
The SAR awards the ROTC Medal to foster the principle of the "citizen-soldier" exemplified by the Minuteman of Revolutionary War days.   In May 2018, I had the pleasure of presenting the ROTC Medal and Certificate to a deserving cadet at Rose-Hulman Institute of Technology and Indiana State University. I also presented the JROTC Medal and Certificate to a deserving cadet at Terre Haute North and Terre Haute South High Schools.
The SAR invites students (9th through 12th grades) attending home schools,  public,  parochial or private high schools who are interested in the American Revolution to participate in the George S. and Stella M. Knight Essay Contest.  I mention this contest, because the John Martin Chapter hasn't had anyone participate.
The National SAR invites all American History teachers whose approved curriculum teaches students about the American Revolution era from 1750 to 1800 to apply for the Dr. Tom and Betty Lawrence American History Teacher Award. The award is open to all teachers at the elementary, middle school or high school levels at recognized public,  private or parochial institution. The program will feature a contest at each of the three educational levels, so there will be a winner for each level. The national winner from each school level will receive potential benefits worth up to $5,000.00 per winner. Again, I mention this contest, because the John Martin Chapter hasn't had anyone participate.
It has been a privilege serving as your chapter president for the past four years, and I look forward to the next two years and hope to see you at our quarterly meetings. If you're interested in helping with any of the programs or contests please let me know.

They will be held in the basement of the Vigo County Public Library, Terre Haute. (7th and Poplar)  The dates are: 16  March, 11 May and 12 October (all on Saturday). The meetings will start at Noon and end around 3 pm.  No guset speaker has been established yet.

The Bi-Chapter meeting is normally held in Trippet Hall, Wabash College, Crawfordsville. The William Harrison Chapter is in charge on the program this year, and the date will either be 3 or 10 August.

The John Martin Chapter will host the Spring House of Delegates meeting on 13 April 2019 in
MCL, Meadows Shopping Center. The Ladies Auxilary will  be given a guided tour of Swope Art Museum on the same day.